This section consists of women going through a significant culture change. Many women before the 1920s were used to one role and that was being a housewife. Young women were also taught by their mothers primarily to prepare to grow up and get into a healthy family like the ones they were usually in. The 1920’s brought in a new era for young women. Young women were entering an age where women could finally not have to wait to marry in order kiss or have intercourse with a boy, but were experiencing a new time where necking and kissing was becoming a trend for girls to follow.  A lot of these girls were known as dappers, a free spirit and would party a lot. Frederick Lewis Allen said dapeprs were a way young women were showing they were rejecting the generations passed down for women. The genre of the section is letters as many women and young women contributed anonymous letters to preach their opinions to an advice column on the change of the culture. The authors are the women writing the letters to the advice column. Many women had very confusion and were hoping the editor would be able to help fix their uneasiness by giving either comfort or even advice. Many women also voiced on certain girls and issues that were happening either at work or at school. The genre of the column also features distinct differences in the attire women would wear. Women would wear looser clothing such as short dresses with a headband and some jewelry. The new attire was very difficult for women to change their fashion as well since women were so accustomed to wearing long skirts, buttoned-up blouses, and sleeves to cover the shoulders of women very few to none jewelry. This letters cover how women found dating and necking a topic of awkwardness since women were constantly frowned upon for kissing guys that were not their boyfriends or going on dates with boys that they absolute no intention of marrying. This section of reading showed a change for women that would ultimately alter the lives of the women we know today.

These letters presented let readers know what dating was like in the 1920’s. The first example presented in dating that really catches the reader’s eye is the third letter that begins with “I am not popular. Is it because I won’t neck and pet?” (509) In clarification, petting means being able to kiss and petting is fondling. It would seem intense that petting and necking was a trend that was almost like drugs in today’s culture. Tying it today, many women are so uncomfortable with being a virgin and feel obligated to either getting around with other guys or simply looking for love in all the wrong ways. The girls in the article feel obligated to try to fit in with the new trend of dating but still seems hard to totally ignore the moral values taught by their parents. The first letter also speaks a lot about the issues on dating. The woman talks about how she grew up not wanting to kiss any guy until her wedding date or not go out with every guy she got to. But she noticed how in high school and even in her work environment the girls seemed to love to go out and experiment with the guys to smoke and pet. Another girl from the letters describes dating in a very similar way. The girl explains how she may have been a bit young but was still going out with the college boys. The girl goes on to explain how the guys would throw parties, either in their fraternity houses or in their own apartments, and would drink with their friends and the girls of course. The night would lead to petting and kissing after a few drinks. The author of the letter also explains how she would feel pressured to drink because she didn’t want to seem too young to have fun or even seem like an outsider. The author ends the letter saying, “Which is the better way, I ask you, to behave and stay home or to misbehave and have a great time?” (509) In conclusion, dating was very much starting to have an uncomfortable feel for some women. Other women loved the idea of petting and necking. It was a chance to be free for a moment while other women still were stuck on values passed down for generations on how women should act.

Areas from this text of conflict among parents and peer groups were very much in common. Parents appeared to want their daughters to live much like their mothers and try to not kiss or fool around with any guy until getting married. It is hard to tell your parents that you will live the life of their mother but have their friends telling them how a certain guy would like to hang out with the daughter. Many parents would seem frustrated how women would go out and have a good time. The dappers of the time would be free-spirited going out and drinking with guys, flirting, and eventually petting with the guys. The old morality was for women to not associate with such behavior because it would really give them bad look. Women with an old morality would commonly seem to get in courtships but would agree not to do anything until the courtship would transform into a marriage. The 1920’s brought in a new morality where girls didn’t necessarily need to be in a courtship to go out and spend a night in the town with a guy friend. Girls most certainly in the 1920’s were abandoning the idea of kissing and fondling a guy after marriage. It would seem how women were now progressing in to a period where women just wanted to go out and have a good time as opposed to being tied down and not getting any fun. Women were also drinking, a thing that wasn’t very in common with most women of this period and time. To wrap up the answer, women were viewing the new morality, and peer group’s morality, to an age where women could be free and be able to drink and pet with other guys without being tied down to a courtship or even have to be in the process of getting married with the guy. The old morality was starting to wear off and the parents of the women of the 1920’s was starting to almost get an identity of themselves and how to have fun with guys and how to be able to experience necking and petting.

In conclusion, women’s petting experience was a huge contributor to the way women’s petting has evolved. Women used to have to stay at home and not do anything really with men since women would be looked at as “whoaring around.” Now women were able to go out and hang out with guys. It was almost like women were escaping a role that was given to them by men. Women were ale to able to break away from the tradition of doing sexual activates with a man while married. Women were able to finally do things like men did and not be looked at the many names given by men to women. Women are able to kiss or fondle any man she wants just like men are able to kiss and fondle any women they like. This topic should be used as a huge accomplishment for women to escape a role of a housewife and to grow into the role of becoming a housewife. Women no longer had to wait until marriage to experience petting and necking and thanks to this period, women could finally be themselves and have fun for a night, just like a Dapper.

"Which is the better way, I ask you, to have and stay home or to misbehave and have a great time?" (509)

This quote represents how women were unsure which lifestyle to live: a traditional lifestyle taught by their mother or a new lifestyle that is growing popular among the young women's peer group. It would appear the author is a young, rich lady as she is torn on what lifestyle to live and a rich lady would never misbehave. 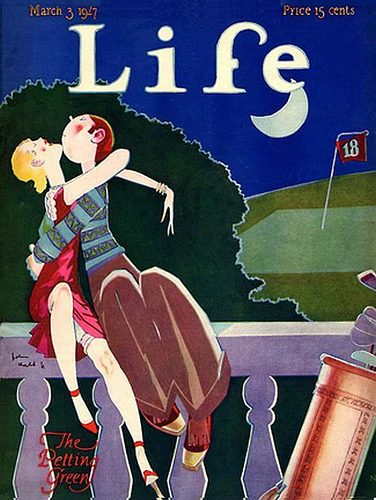 This picture shows a young couple on a date at the golf course. Unfortunately, instead of golfing, the couple is spending more time petting. 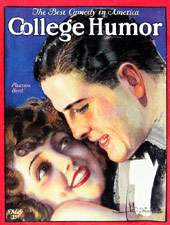 An image of a petting on the front of a magazine. Petting became a popular form of women and men to date and be able to experience dating before getting married.

This is a picture of a caption from a news paper article. The article describes how mothers aren't proud of the decision by their daughters petting. It relates to the article of old values versus the new values. 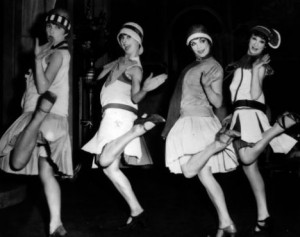 A popular image of young women during the 1920's. These ladies were known as flapper girls and were notorious for wearing clothing that wasn't very lady like such as loose dresses with no sleeves.
This here is a music video with the song Let's Misbehave by Irving Aaronson and portrays young women living free. It shows how women loved to dance and mingle with men and possibly hook up for the night.