Women in the workforce:  The history of how women came into clerical jobs using the typewriter and the experiences they faced

For many women in the workforce, gendered expectations in the office during the 19th century centered around mundane clerical jobs. Although that may be the main idea that defined women’s lives in the workforce during that time, there were many other economic and social conditions that shaped their lives inside and outside of the workforce.  Traditionally, women were rarely seen in the working world alongside men. However, due to many other variable factors such as feminist movements, technological inventions, post- world war and economic conditions the traditional expectations of women have been challenged. Women have been elevated from their marginalized domestic roles into the corporate workplace. Although this change broadened the scope of women’s abilities and responsibilities, it also brought about many challenges and hardships.

The oppressive domestic role assigned to women was challenged during the World War Two. Initially, Women’s abilities were confined to the home, and nowhere near the workplace. During the war Women were hired due to the high demand of resources the war required. Hence, World War Two brought about change and challenged the traditional role of women. The integration of women into the workforce during the war certainly proved that women possessed the capabilities to cope with the pressures that men often faced in the workforce. (American Experience, PBS.) This opened up employment opportunities in the manufacturing sector and gradually into the office too. Soon women were qualifying for more professional jobs that required higher educational backgrounds. The social stigma of women abilities, roles and responsibilities gradually began to expand from within the household and into the paid labor workforce.

The reason women entered the working world centered round many different issues that women faced during that point in time. As the late 19th century was a time of much confusion, transition and changes with many movements from feminist, cultural and social changes occurring. (Walsh, Kenneth. US NEWS March 2010.)  Hence, the reasons affecting a woman's decision to enter the workforce expanded far beyond needing an extra source of income for the household. Women were craving the same job satisfaction and career minded goals akin to men. Moreover, with the introduction of contraception during that time period, more and more women were enabled to pursue careers and fulfill corporate advances. (Goldin, Claudia. page 18) This resulted in less women staying at home and starting a family.

The feminization of women’s work in the office was heavily influenced by technological advances. The most influential being the typewriter, as modern offices began to keep records of their work hence increasing the demand for typist and clerical positions. Moreover, many new firms required documentation to be typed efficiently in order to increase the productivity level of their company. Hence with the introduction of the revolutionary technology surrounding the typewriter, a whole new evolution in office jobs were created. Clerical work fell onto women due to several reasons. Firstly, Wages for these particular jobs were relatively low as it did not require a high educational skill set. Secondly, men were unwilling to take up such jobs due to it's mediocre pay which was insufficient to support a family. Therefore it eventually leaned towards the female gender in the office.( Hoke, Donald page 3) Thirdly, work in the office was seen to be more respectable than other jobs in the manufacturing or textile industry for middle class single women and wives. As a result, the female demand and supply for clerical employment increased.

In the wake of this technological invention, women began to enter the workforce at an extremely rapid rate, however the problem with the typewriter although paving the way for women into the workforce brought along with it many social and economical problems for women. Women took these jobs on without expectations of higher wages than men. Women also started to be seen only limited to clerical positions, thus limiting them from climbing the corporate ladder to higher positions. In this sense, the typewriter can be seen as a fallacy on its own, but nonetheless an invention that changed women’s lives on a whole.

Ultimately the implications of all this in relation to women’s history is that women in the workforce and the experiences they faced gave us a huge insight into the gendered expectations, roles and responsibilities of women during that era. Not just in the office but in the home and in general as well. This knowledge helps us identify certain behavioral traits of women and also how certain women’s organization and feminist movements were formed and on what basis. For example the ERA (equal rights amendment) which although did not go through touched on the topic of equal pay for equal work for women. Knowledge of women in the workforce is then relevant in understanding the concept of women’s lives in the 19th century as it played a huge role in the broader aspect of how women were treated. From the sexual harassments to social discriminations and pay discriminations and as well as how women were even able to enter the workforce into white collar clerical jobs.

In conclusion, the working environment opened its doors to women with the end of the World War along with technological inventions such as the typewriter coupled with a growing economy. With women in the workforce, this new concept challenged traditional gendered expectations and redefined the limits of women’s freedom of choice between having a career and having a family. Women have broken free from the limiting role assigned onto them in a patriarchal society.

Hoke, Donald. “The Woman and the Typewriter: A Case Study in Technological Innovation and Social Change.” Milwaukee Public Museum

This source is an advertisement put out by the Royal Typewriter Company in the 1960's. During that time period typewriters were mostly used by women in clerical positions at the office. As clerical and secretarial jobs of typing documents and keeping records fell mostly towards women, the most commonly used office tool by women ended up being the typewriter. The advertisement depicts a young women dressed accordingly in office attire smiling over the typewriter with the caption "Its so beautiful...so dependable... and you save $95.00" Clearly the target of the advertisement is to appeal to women working in the office. What this really tells us however is that clerical positions in the office was mainly dominated by women so much so to the extent that typewriter companies even started coming up with advertising targeted towards women reinforcing the idea that the typewriter which is associated to clerical work involved mainly only women. 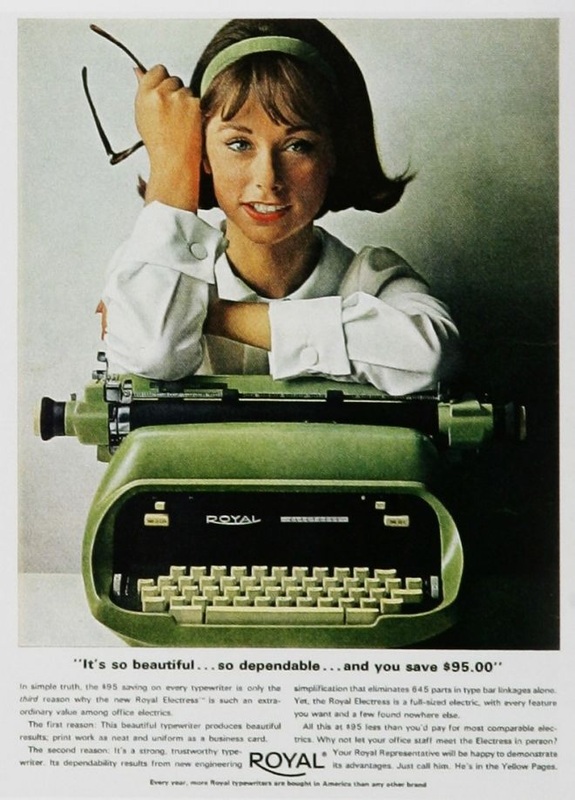 This video is an advertisement from ibm showcasing their first electric typewriter. The underlying significance of the video is that only a women is showcased using the typewriter, reinforcing the point of the typewriter on a whole. Ultimately it was a tool mainly used by women as it was mostly women who held clerical positions that required the use of a typewriter 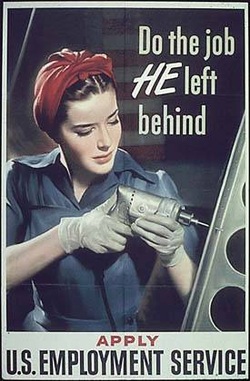 The picture is an advertisement aimed at recruiting women for employment into industrial sectors. The significance of such a picture is that it changed the perspective many had of women, of their ability to do the same jobs that men had previously done. In it the advertisement says "do the job he left behind" As with world war 2 men were drafted to serve in the military leaving a huge demand for employment that women had to fill. After the war, it was then that women started to break free from traditional roles and into the working world because they had proven that they could do the same jobs as men and that women began to explore the freedom of other options not limited to traditional expectations.

The picture above depicts a working women set in the 1960s surrounded by men ogling at her. Unfortunately as sexual harassment in the workplace during that point in time was rarely if not never captured this picture showcases the form of sexual harassment women were subjected to in a tasteful manner. Its significance to my topic is that although women had progressed in the workforce to white collar jobs of clerical and secretarial nature, men in many ways were unhappy with this change and in turn objectified women, making their lives extremely difficult in the workplace plagued with sexual harassment's and pay discrimination 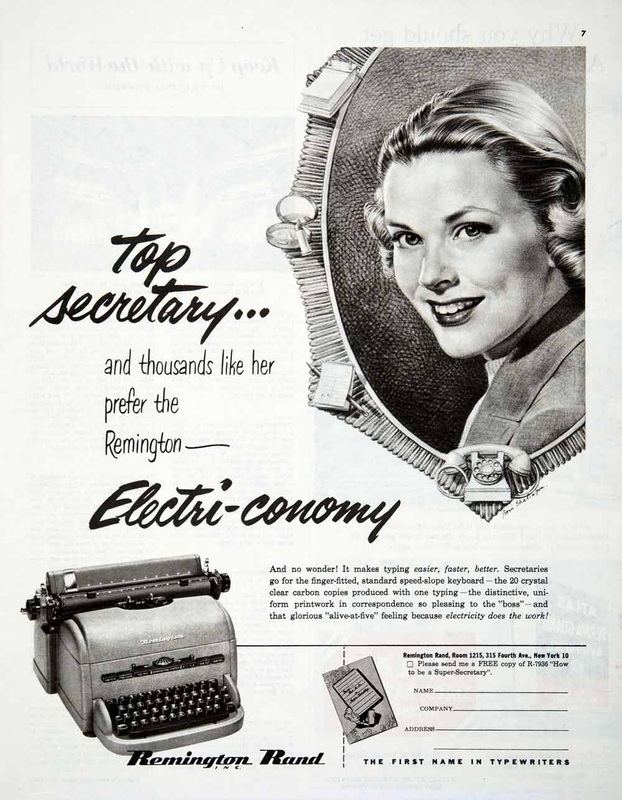 The picture above is an advertisement by the remington company, depicted above is a women and a typewriter with the caption "top secretary and thousands like her prefer the remington" This  advert only goes to further reinforce the idea that typewriters were mainly used by women in secretarial positions hence why companies came up with advertisements for their typewriters depicting women as secretaries and aiming at them.