Sally Rudd wrote this letter to her niece in the mid 1800s while a housekeeper to Asa Mahan, the president of Oberlin College. Sally wrote this letter to inform Mary that if she pursues in going to college it could really benefit her in the long run resulting to landing a really good education with her help. She wrote that Mary wouldn’t have to do any hard work nor chores for it was all taken care of by a maid. She wanted Mary to go to Oberlin College, which was one of the first colleges to have coeducation and offer A.B degrees to women. Not only was the college coeducation, it was also allowing African Americans and whites be in the same college together. They let the students eat together (men and women) and also have classes together so that they could break this issue against each other that society places on them. Mary eventually accepted this offer to attend college and experience what life would be like. Mary was one of the first female candidates to receive her bachelor’s degree and graduated in 1841 from Oberlin College. Soon after she graduated, she then married George Nelson Allen, a professor at the college.

In her letter, Sally thinks it would be a great opportunity for Mary to obtain a complete education. By Mary attending college it would mean her Aunt Sally would feel as if she was the one who encouraged and motivated Mary to get her education and being better than the average men in the country who are getting their education as well. She wanted her to challenge herself as much as possible and not settle for less. Sally explains in the letter that Mary wouldn’t have to do anything but her schoolwork and occasionally babysit when she isn’t studying. She also says that this is a chance for her to start a new life and make new friends. Mary can be an independent woman and not rely on her dad anymore once she goes to college. Going to college will only make you grow as a person in all aspects of life and it helps you find out who you really are and what you really want to do with the rest of your life if you put your mind to it. Sally is trying to make her niece see all of these great opportunities there is to do in college. Mary can be her own person and do whatever she wants freely. My parents were the ones who pushed me to go to college because they didn’t want me to end up like them and not getting a college degree. Maybe this is one of the reasons Sally wants Mary to go to college so she doesn't end up being a housekeeper like she did. There are so many things you can do in college that you couldn’t do before in high school. College is a chance to see how far you can go in challenging yourself and dealing with situations on your own that you didn’t have to deal with before.

She encouraged her to attended and offered assistance, recognizing that Caroline’s father would scoff at the idea of a girl attending college (240). Mary’s father thought women weren’t meant to go to college. He already had that mentality where a woman weren’t meant to get an education but rather stay home and do household work. Mary’s father objected to her going to college for this very reason. He thinks she doesn’t belong in college but only at home. In this era, men were the only ones able to do anything and women were stuck at home doing all the real work. At this point in time women were barely able to do anything including going to college, being more independent and not relying on their husbands for anything. My dad encouraged me to go to college and get a degree but times are different now. Mary’s father doesn’t see what college has to offer his daughter. College is a very great influence on some kids; it can give them a sense of mind in their self-individuality and being on their own for the first time. College does cost a lot of money that’s the only downside. That could be another reason why Mary’s father didn’t want her to go to college. For me, college has been a great impact. I’ve learned so much about myself and made so many close friends that I will keep in touch for the longest. I’ve also experienced how it is like to house my self and be on my own. This could also be another reason why Mary’s father objected her to going to college. He didn’t want to see his little girl go and be on her own without him being by her side.

In conclusion, this source is important to understanding the topic by letting readers know that college is important to women and that women didn’t always have the right to do the things they wanted like today. College is important to women because women felt underestimated by men in this era. Society felt as if they weren’t good enough to meet the standards that men met. They felt that women were supposed to be in the house, taking care of things that pertained to the house and of course the children. As appose to the men working all day so they could support their families. The government barely started recognizing and letting women be free in this era like getting jobs and letting women to work too not just the men. They got low paying jobs but at least it was something. Also letting them go to college and having classes on women’s history. Women also didn’t always have the right to do what they do today like having a job as a CEO or even as the president. Women got jobs in this era but they got really low paying jobs like working in a factory. No matter how hard a woman worked she still didn’t get paid as much as a man. Till this day women still don’t get paid as much as men do in some companies. It was also hard for women to get a divorced without them feeling like it is a burden to them. Today, it is not that hard to get a divorce without women feeling like it’s a burden. If they feel that way they can easily get over it in due time like going to therapy or simply just dealing with it on their own.

This quote is significant to this topic because no matter what happened to these women in terms of equality, they never took their eyes off the prize which was proving everyone wrong and getting their education and actually graduating alongside other men and women.
﻿ 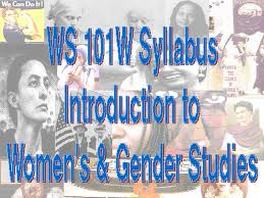 This picture shows a class on women's history. This is only possible today because of the women in the past who fought for our rights as women.