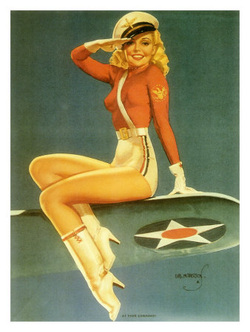 Pin-up girls started in the early 20th century where women were considered risqué if their bare ankles were showing. At that time, sex was not even spoken in public places. The birth of pin up girls started with stripteases and grew from there. And what they grew into was something beautiful that empowered women and made the men of the world happier then ever. Although it took a downfall with pornography, it made a quick come back and is still around in this world today.  It is found in not only playboy magazines but in women’s magazines as well. The models that we see today are originally there from the first creation of the pin up girl.
It was around 1915 that a slang world “cheesecake” was being used in public as mass-produced sexual images of these women. But then there was “borderline material” which widened the gap between cheesecake and pornography. Each of these words helped define people as being normal and healthy. However, over time the word “cheesecake” referred to images that were different then what they used to be referred to. 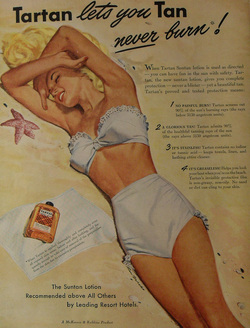 Another reason that the pin up girls was created was because companies needed another way to sell their products. When these semi-naked pictures of these women appeared on the advertisements, men were very excited. Women however, were not, and for a good reason. They would believe that when men saw these pictures and pieces of artwork, then they wouldn’t want their women. From either not dressing like what they do in the pictures or by not looking like what they do in the pictures. After a few years went by, women became more open to the idea of half naked women because they began to show up in women’s magazines. Mostly to show off swimwear. But it also showed off clothing and thus having women enjoy it more then what they used to.

Then in the 1920’s as the flapper came into the picture, women where showing more of their legs then ever. During that time magazines where using naked women to show their stories of murder. However, sex was also used to show how the author wanted to portray jokes and different stories. Artist such as George Petty and Alberto Vargas drew the first pin up girls. Together they created calendars that where in the dorms of many young men at that time. in the 1940s the pin up girl was looked at not as a prostitute but as something that strengthened the soldiers and would make them want to return back home.

The time that the pin up girls really started to take off was during World War II. Many solders had a painting of their favorite movie star just so they could be reminded of their home. Solders enjoyed pinups so much that they decided to paint pin ups on the sides of the aircrafts that they flew for good luck.

During the 1950’s and early 1960’s girls started posing for pin up girls in the form of photography. This is the art that is known in the world today. Then magazines decided to post articles along side of the pictures and people seemed to enjoy that very much. That is also how the famous magazine called Playboy was founded. When Hugh Hefner founded playboy his magazine shot off like a rocket and is still booming to this very day.

After a few years, models and artists began to create pin ups with different categorizes like different fetishes, bondage and other things such as that. However, some of the images were considered to be very dark compared to the fun, innocent tease that people are used to. Over time, more and more people would start to like these images and ask for other fantasies as well.

It came into question when younger females would look at these images. It would alter the image that they saw themselves and not always for the better. Younger girls would see these models and feel as if they needed to look like it. Then they would starve themselves and become very sick. It also showed the models more as objects rather then people. Showing younger girls that it is ok if people view them as objects because that is what would make them feel wanted by everyone else. It is still obvious that people can see these problems in the world today because young girls would rather starve themselves to look like the models in the picture when in reality the women in the pictures today are all photo shopped.

Pin up girls were originally created for the men at war. They would buy the magazines at railroad stations and then during the civil war, many soldiers had mail orders for naked women. That seemed to be able to get them through the stress of the war. They liked it so much that they would keep the pictures in their pockets for good luck. It also lined the insides of their lockers. In some cases it was their only link to back home. When it seemed like they were in trouble they would pull out the picture and kiss it.

It was in the 1970s when the painted pin up girl fashion about died. The new era demanded more and more of these pictures and the paintings were not coming out fast enough for the public so they were forced to move away from the paintings and focus more on the photographs of the women. This act made the artist retire from the job that they began and created and loved so much.

With the invention of the video camera the demand of adult material had begun. Men wanted videos of more then just women posing, they wanted them to be more lewd and have more graphic material that depicted sex. The world of the playfulness and innocent pin up girls were gone forever. No longer where there just pictures of women, but they had to be depicting sex and inciting men.

As the 1980s came around, a new artist by the name of Dave Stevens kept the art of pin up girls going when the Internet arrived. And by the late 1990s the interest in the classic pin up girl paintings and photography came back up again. The lost art of the old pin up girls has finally started to make a come back. The powerful pictures of women modeling and looking beautiful were making a come back and people were getting excited.

During the past few years, more and more people have begun to find an interest in the original pin up girl. Nonetheless, there is still more interest in pornography. Pornography plays such a big part in society today that pin up girls could never come and replace it. However, in the past, it was the pin up girl that over past the pornography.

Pin up girls have evolved from just paintings to paintings and pictures to just pictures then to pornography then all back again. It was created to show powerful women and to comfort the soldiers who were away at war. Pin up girls have been to the moon and back and will be around for many more years. As long as men are buying them, and women are buying magazines, they will always be around. The real trick is to try and remember where it all started from and try and find out where is it leading us to for the future.