Welfare is Like a Supersexist Marriage:
(WOMEN, POVERTY, AND WELFARE IN THE TWENTIETH CENTURY)

“Welfare is Like a Supersexist Marriage” is an excerpt out of Johnnie Tillmon’s essay “Welfare is a Women’s Issue” published in Ms. in the 1970s (673). Tillmon was the co-founding chairperson and president of the National Welfare Rights Organization that was established in 1967 (673). This organization was started out of necessity because the feminists of that time were not concerned with the issues of the women in poverty (671).  She was a mother of six children who was also on welfare and knew how much of a struggle it was to survive just on aid alone (672). She believed that it was important that women got the proper treatment and income so that they could support their families if they couldn’t work, or if their salaries weren’t enough to support their children and family. This alongside the racism that women of color faced in the work place and in society made living in America at this time extremely difficult and at some times unbearable to even stand.

Tillmon identifies several problems that made welfare a female issue. She identifies that the majority percentage of recipients of welfare, Aid to Families with Dependent Children (AFDC), are women (672). In fact, she states that 99% of the families that are receiving AFDC are in female run households (672). Besides other stipulations that make this a very valid observation, the Equal Pay Act of 1963 forbade pay differentials between men and women, based on gender discrimination by private businesses (667). Before this legislation was passed, many women worked outside of the home to support their families, but gender discrimination prevented them from earning enough to make ends meet, making it necessary for many women to seek federal assistance. This leads to her next point about how the female-headed families had no additional supplemental income (i.e. there was no man in the home) so statistically speaking, welfare had minimal impact on the men in America, if it impacted them at all. In fact, families were not eligible to receive welfare benefits if there was an able-bodied male in the household, which then further perpetuates the notion that welfare is designed for poor women, particularly poor women of color. Poor women of color often felt as though they had no choice but to get on welfare, and even more than that, like there was no way to escape from it once they got started.

Tillmon has a complete grasp on the place of men and of the ideas of masculinity in welfare debates. In her article she greatly emphasized the lack of involvement that men have in the welfare system. AFDC is designed not only to entrap women, but specifically women of color. Tilmon brings forth the point that welfare cannot even be awarded to a family that has a man residing within the home. Making it apparent that men were not intended to be a part of the target demographic when this program was being designed. So from the very beginning men had no place in the vicious cycle and it can be assumed that this is due in large part to the societal stigma that perpetuates the notion that if a man needs assistance of any kind, he is deemed weak. Veritably, society has presumed that a real man would never come close to having his family on welfare because he should be able to provide for his family in such a way that the need should not arise. This constant misrepresentation of masculinity in turn gave birth to the idea that women were not intended to take care of their families financially.

Tillmon makes several references and comparisons between “a man,” and “the man.”Tillmon alludes to the fact that women were in essence pushed to trade in “a man,” her man, for “the man,” the system. As previously mentioned, a family in need of welfare is not eligible if there is an able-bodied man in the household, who is presumed capable of taking on the financial responsibilities. This leaves the family, especially the mother/wife, with little choice but to remove the man from the equation altogether, so that she can receive a sufficient income to support her children and any other person that she may have in her care. The catch to this is that her income, whether supplemental or not, is now coming from the government which some also refer to as “the man.” When referring to “the man,” it can mean a variety of things but generally it revolves around the central concept of the sector of wealthy White America that perpetuates financial and societal hindrances to set in motion the systematic oppression of minorities, specifically people of color. “The man,” being the concept that it is, doesn’t allow for this supplemental income to be anything but a burden. Once a poor family is receiving income from “the man” it is virtually impossible to stop. Not only that, but unlike “a man” a woman can’t leave when she feels and “the man” can come and go as it pleases and take its money with it. This leaves women teetering on the thin line between being on and off of welfare and receiving the right amount of income. If they get married or even stay single and try to find a better paying job they could easily lose most, if not all, of their supplemental income. In short, these women who stay on welfare have to stay just poor enough to survive.

Johnnie Tillman’s article in Ms. is an imperative piece that not only encompasses the twentieth century issues in regards to women on welfare, but these same arguments are still valid in today’s society. It can be seen in her piece that the middle-class feminists who were activists for civil rights, were not concerned about the plight of the poor woman of color in America, which gave no prompt for the general public to become concerned either (671). This piece was a push towards a wake-up call for the rest of the impoverished women to rise up and join in the NWRO’s fight to establish better conditions for themselves while they are receiving their federal aid. This article further emphasizes the point that women on welfare should not be deemed lazy or incompetent, but they should be revered and deemed intelligent for the capability to survive and support on little to no salary and aid (673). Due to the fact that history repeats itself time and time again, it can even be seen that the women receiving their federal aid today in modern America are just as brilliant because they suffer from the same predicaments. Women’s history in America and in the world paints a portrait of a constant uphill battle for notoriety and equality in the eyes of a male-dominated social and political order. This struggle and the many alike are just a testament to women’s ability to persevere in the face of great adversity. And when these battles are won, which they often are, they should go down in history alongside the many accolades of men who have been deemed great; lest we forget that women birth nations, literally and figuratively. 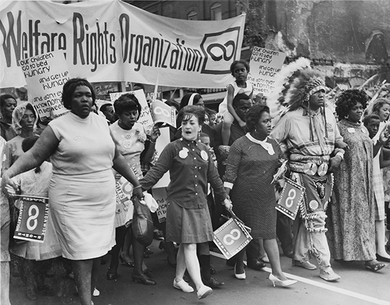 ﻿﻿﻿﻿﻿Here you can see how their movement paralleled to the other Civil Rights Movements, but yet they were not getting the exposure that the other feminists and other movements were receiving.  This is a picture of Johnnie Tillmon and other women apart of the National Welfare Rights Organization and their movement to improve the rights of women on welfare. 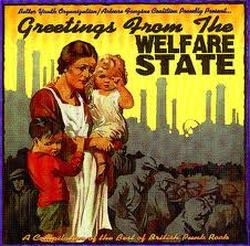 This "postcard" shows exactly what most people aren't aware of, and that is that most women in poverty are white. This is not a well known fact because most people only look at the fact that women of color make up majority of the women that receive welfare.
Although this video does not provide imagery of what exactly happens in every impoverished women's life, the message is still the same and it is still relevant. This video perfectly encompasses what poor women (single mothers especially) must deal with on a day to day basis just so that they can provide for their families. It can also be seen that the statistics in the end of the video, about how much women work do, still apply. They even hit on a view points that the class spoke about in regards to how much extra work a woman must do as a caregiver. 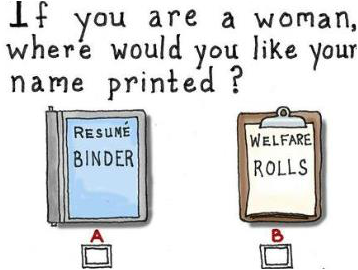 The fact that this picture even exists, implies that a large amount of people actually believe that most women want to be on welfare. Not to say that there aren't women like this, but as stated in the text above, most women on welfare are looking for a way off and just can't find a solution. People should definitely keep this in mind when they start to judge and make assumptions about these women and their families.
This video is so important because it provides a solution on how to break the vicious cycle of poverty. Most people don't think to start young with the children to help combat the cycle like Eva Longoria is stating here. Education is a key comp﻿onent that can allow children the knowledge to help make better choices and have better opportunities so that just because they came from a poor family doesn't mean they have to start one of their own.