The notable Elizabeth Cady Stanton used her platform to promote a grand lecture tour. Over several months Elizabeth Cady Stanton traveled from different states and stayed in hotels with other members of the tour. They would often get together on Sundays and reflect back on their experiences while on tour. Judging from Stanton’s reports campaigning for women’s suffrage rights after the civil war was a very great experience. Not only did Stanton advocate for women’s rights, she was also able to connect and engage with the women in her audience. She was able to not only create a bond with her audience but also the members on the tour. She was able to travel and provide herself with a source of income. She felt a “pleasant feature” when she realized all her work for advocating about women’s right resonated with the audience (310). It was a great experience for Stanton because she was able to use her leadership role to help advocate issues to women across many different states while also providing a living for herself. Stanton was able to travel and educate her audience on the wrongs of current issues going on in their country. She used her tour to spread along a powerful and influential message for women to finally take a stand. She helped women realize they were a meaningful asset to their country and that they too should without a doubt have the same opportunities as men.

Many people attended Stanton’s lectures because she was a highly respected activist. She was well known which helped in creating a platform for her. She was an influential leader who fought for women to have equal rights as men. She provided her audience with powerful political messages regarding women’s rights that allowed them to feel like they were capable of making a difference. Her lectures also included women being able to receive higher education. Stanton also took the time to connect with her audience. She engaged in conversations in which they talked about their concerns about reproductive health and family limitations (310). Stanton was a person who her audience greatly admired and respected. Stanton was able to gain much respect because she talked about issues that all women related too. She was able to create and form a bond with the women over the many states she traveled which helped gain her popularity. Stanton advocated on issues that all women could relate to. Because Stanton was such a powerful advocate for women rights more people would attend her lectures to be educated on the issues from a political standpoint. People highly respect a person when they can take a stand against a wrongful idea not only because it doesn’t benefit them personally but also because it is unjust and unfair for others. Elizabeth Cady Stanton earned much respect because she was willing to help others rather than ignoring current situations.

Overall, Elizabeth Cady Stanton was a very influential leader during the time of her campaign. She not only advocated for women suffrage but she also believed that men and women should receive the same power and privileges. This source was important to the topic of woman’s right because Elizabeth Cady Stanton played a huge role in many of the accomplishments that exist today. The passing of the 16th amendment has been exercised wisely across a nation. Her fight for women in higher education for example is now a privilege that many get to experience. Women are now able to go to school and be able to make a better living for themselves by applying for higher wage jobs that used to be occupied by men. Women now have the same access to opportunities that men mostly held. Also women are now eligible to have property rights. Women no longer have to depend on the men. Before women were granted property right, men essentially had all the control. Women now have the chance to be held on the same pedestal as men because they are now granted the same equal rights. Elizabeth Cady Stanton played a very vital role during the time of women suffrage. She was able to use her voice to spread and advocate on topics that many ignored and lived with. She was a strong leader who took the initiative to be a role model for other women. The tour she embarked on across many states made a major impact on how things are now done in society today .Elizabeth Cady Stanton was a very strong women who in the end got what she wanted by creating a challenge for people in the higher political parties who overlooked and ignored these problems women endured. Elizabeth Cady Stanton was a remarkable activist during the era after the Civil war.

"We hold these truths to be self-evident: that all men and women are created equal."

This was the motto used as her platform during her lecture tour. The motto resignation with her audience because she believed women and men should have the same rights. This quote holds the citizens of this country accountable for treating men and women with the same amount of respect. This is very meaningful, because Martin Luther King Jr. used it in a popular speech during the civil rights era.

Neither man nor woman are superior to one another. Being that men and women were created equal, they should be treated as such. 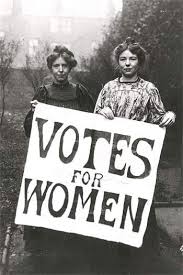 Men and women were created equal and should be granted the same rights. Women deserve the right to vote in political elections. 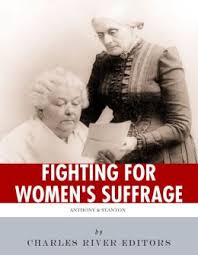 Though men and women have the same natural born rights, they were not necessarily granted legally. Women fought hard to gain the right to vote