The Busting Brazenness of Brassieres in The United States

Primary Source: Her Half Billion Dollar Shape by Pete Martin

In the October 15, 1949 issue of the Saturday Evening Post, Pete Martin wrote the Article, Her Half  Billion Dollar Shape. In this article, Martin exposed the many breakthroughs and efforts many companies have to go through to innovate new undergarments for women to have the perfect shape. You could say what they are trying shape women during that time is what we shape women in what we have today Spanx. In this article, the bra was one of the women's undergarment that contributed to the perfect shape. During this time, WWII ended and it's the beginning of the Baby Boom era. This article have photo depictions of many different types of bras in many shapes and sizes. This article is most likely been produced because it was seen fit to expose the effort of what women had to go through to have the shape they have. It's like unmasking what's under the visible clothes. Also, it shows women what to wear under their clothes to have that shape. The Saturday Evening Post was perfect source to get through to a national audience. This definitely related to the topic at hand because it shows the elements of what kinds of bras women wears and what financial capacities women have to endure to have the beautiful shape that is desired from them.

This is a video about a 1960's commercial advertisement for the Playtex 'Cover Your Heart' bra . The commercial depicts the bra used for coverage and support, instead of just beauty. 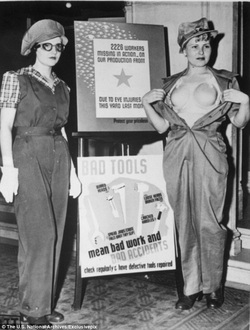 This is a photo of the women modeling for a 1947 patent of the bra. You could tell that this is from the WWII era because of what the two women was wearing. The woman exposing her bra was wearing a riveter outfit. This relates to the topic at hand by the fact that women could wear an undergarment to work in without trying to look beautiful, but wear it for comfort and support.
This is a video about what really happened during the 1968 Miss America pageant in Atlantic city. The video basically exposes that there wasn't any bras that was burned and talks about the Freedom Trash Cans.  Also, it talks about the heights feminists went through to advocate what seems to be the portrayal society saw women as during that time. 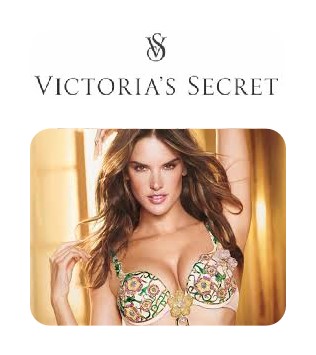 Without the many innovations and evolution of the bra, women companies like Victoria Secret would not have been very prevalent in the late 20th century and in today's society. Victoria Secret broadcast different fashion shows and catalogs to women so they could wear their products. In a way, Victoria Secret shapes the bra as a lingerie item, even though it was not the first company/thing to shape/mold the bra as.