Title IX is a law that was passed in 1972 that requires gender equality for boys and girls in every educational program that receives federal funding.  There are 10 key parts of the law but it’s most famous for equality in sports.  The other key focuses of title IX are : access to higher education, career education, education for pregnant and parenting students, employment, learning environment, math and science, sexual harassment, standardized testing and technology.  Before Title IX only one in twenty seven girls played high school sports (titleix.info). Title IX changes athletics in both high school and college for girls all across the nation.

The Civil Rights Act of 1964 was written to end racial discrimination and it jumpstarted the women’s rights movement that has lost some momentum.  Indiana Senator Birch Bayh was the first person to bring title IX to congress.  During the time he was working on title IX he was working on numerous issues regarding women’s rights like the Equal Rights Amendment.  An initial concern regarding title IX was that it would take away from men’s athletics.  The NCAA tried to fight title IX and said that it was illegal for a law to tell them they had to let women compete in college athletics.  There are certain school related organizations like boy scouts and girl scouts.  Title IX states that women’s and men’s sports must be equal meaning they get the same amount if funding, practice times, and medical training facilities. Since title IX has been passed there have been a number of court cases when schools have tried to get around title IX.  In 1996 Title IX was used in a court ruling against Louisiana State University.  LSU refused to fund a trip their women’s volleyball team was going to take to a tournament in Hawaii.  Earlier that year LSU funded a trip for their men’s basketball team to go play a tournament in Hawaii.

It’s hard to believe that just over 40 years ago girls couldn’t play high school and college sports.  Growing up I played tennis, golf, lacrosse, volleyball, and hockey.  In high school I won awards for playing a variety of different sports.  I am now one of the millions of women on athletic scholarships and to think that there were so many talented female athletes before title IX is unbelievable to me.  One of my personal hero’s is Babe Zaharias.  She was an outstanding athlete and gained her fame in golf, basketball, and track.  She won three Olympic medals, two gold and one silver in the 1932 Los Angles Olympic games.  She also was an expert diver, softball player, and bowler. Zaharias was denied amateur status so she entered PGA events.  She was the first woman to do this and the next woman to play a PGA event was 60 years later.  Babe Zaharias dominated the ladies tour with a total of 82 wins and she was a very popular celebrity.  Zaharias broke the mold of female athletes.  She was able to compete with the men.  I often think about the career she would have if she were born even 50 years later.  Title IX would have let her compete in college and she wouldn’t have faced the ridicule she faced in the 1940’s and 1950’s on the golf course.  She was named one of the top 20 athletes of all time.

Title IX changes women’s athletics in a positive way.  Before Title IX was established in 1972 only 295,000 girls played high school sports and now over 3.2 million girls play high school sports (Bowen 2012).  Before title IX there were hardly any sports scholarships for women in college.  Now there are 200,000 women playing college A 10 year old Utah girl is breaking gender barriers.  Sam Gordon is a 10 year old football star. She gained her fame in 2012 with over 1600 rushing yards in her pop warner football league.  She appeared on the cover of Wheaties in 2012.  This little girl playing football outrages many people.  People are saying that girls can’t play football and that girls aren’t tough enough to play with the boys.  This little girl tackles and gets tackles the same ways the boys do, and these young boys don’t care that she is a girl.   Erin DeMeglio also made football history in Florida being the first female starting quarterback of a high school football team.  Katie Hnida was the first female NCAA Division 1 football player ever she was the back up kicker for Colorado and New Mexico state.  Even in sports today women are getting insulted.  Many people think watching the women’s sports is boring and they aren’t as good.  More and more young girls re starting to play sports so maybe in 5 or 10 years there will be more talented women playing professional sports.

“No person in the United States shall, on the basis of sex, be excluded from participation in, be denied the benefits of, or be subject to discrimination under any education program or activity receiving Federal financial assistance.” This passage changed the lives of many female athletes.  Title IX is the reason I can play college sports and I can play professional golf after college.  Title IX has made it possible for girls to play high school sports and gives them equal opportunity to succeed in the classroom and on the field.  It’s strange to think that 40 years ago women weren’t allowed to compete in school athletics.  I take the opportunity I have to compete in sports for granted.  There were many talented female athletes before 1972 that never got the opportunity to play sports.  Title Ix has given girls the equal opportunity to be athletes.

"No person in the United States shall, on the basis of sex, be excluded from participation in, be denied the benefits of, or be subjected to discrimination under any education program or activity receiving federal financial assistance." Title IX

Title IX was written in 1972 and it as a huge victory for women.  Up until title IX only 1 out of 27 girls played high school sports.  This law made it so girls in high school and college had the opportunity to compete in sports without facing discrimination. Title IX was brought to congress by Birch Bayh who was a support of women's rights and equal rights. 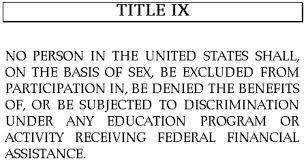 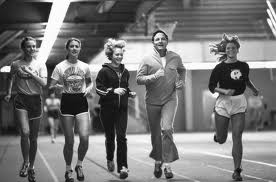 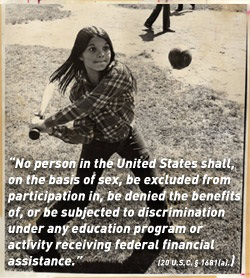 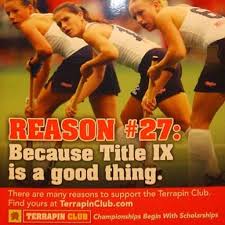 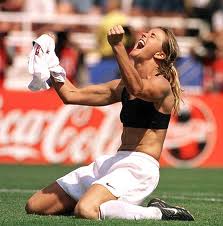 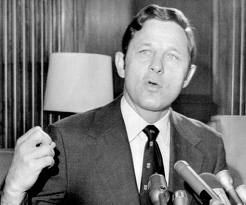 The image on the top left is Birch Bayh the leader in getting title IX passed running with a grou of collegiate female runners.  The image on the top right is a title IX support poster with title IX printed on it.  The middle left is a poster published on the 40th birthday of title IX. Middle right is the famous picture of Brandi Chastain after winning the 1999 world cup.  She is an active supporter of title IX today. Bottom right is a propaganda poster. Bottom right is Birch Bayh who made title IX a reality