Frances E Willard considered the amount of relationships between women that were hidden before the 1920s by stating “there is no village that has not examples of ‘two hearts in counsel’ both of which are feminine” (Faderman, 26). His analysis of women’s relationships shows how secretive and unknown female relationships were in everyday life. Before the crazy and reckless times of the 1920s, the idea and word “lesbian” was unknown and completely ignored by society. The only type of lesbian activity acknowledged was reckless behavior of women who were going against the norm of society (Faderman, 27). William Cullen Bryant wrote an essay for the Evening Post and described a relationship between two women calling the relationship a “beautiful and peaceful relationship established together” (Faderman, 27). His analysis on the female relationship shows how satisfying and strong women’s relationships were even if they were not able to express it in public. Once women began to truly express their sexuality during the 1920s, a new type of freedom and expression evolved through their actions, music, poetry, and the freedom of the Harlem Renaissance. Women’s new expression of freedom was risky and dangerous but allowed woman to finally express herself and show her true sexuality.

During the 1800s, lesbianism was virtually unknown and frowned upon by the majority of society. Sherrie Innes wrote an entire article on the lesbian culture during the 1920s, and stated how a woman who engaged in a passionate relationship with another woman was considered “a man trapped in a woman’s body,” meaning because of her sexuality she was considered completely unfeminine (Innes, 4). Whether or not the relationship had any physical contact remained insignificant. The mere thoughts and desires for another woman proved to be a disgrace to society. Woman became so fearful of her attraction and desires toward other woman that she began to completely deny her capability of any passionate emotions toward another female. The term “in the closet” originated from this time period when women (and men) were too fearful to go outside and express who they truly were (Innes, 4). Although the idea of “coming out” terrified the women of this century, it would mean a freedom that they have never known, and allow them to truly be and experience who they really were for the first time in history.

The gradual growth of women becoming lovers began when the active role of feminists during the nineteenth occurred (Innes, 5). These feminists found it their duties to free women of the normal expectations set upon them. With these active feminists speaking out for women and making changes in education and transportation, women were able to make a life for themselves. Whether this new life included other women or not, they would not have to worry about the restrictions placed upon them previously by society. The women who participated in this new lifestyle were generally in the middle class, because the upper class still thought these activities to be inappropriate and unprofessional (Innes, 5). Women in the upper class were still confined to their expectations, and similar to the period of the 1800s, constrained in their expectations and unable to express their sexuality (Innes, 7).

Lesbianism was and virtually unknown because before the 1920s the only information on these women was through medical books, analyzing the situation and the medical health of these women (Innes, 8). This point of view gave society the idea that there was something medically wrong with women who were attracted to other women. But once Freudian texts were released about the fascination of homosexuality the world was suddenly “awakened to the startling wide existence amount people of high and low degree of sexual attachments” (Innes, 8). Freud’s analysis voiced the virtually unknown; women were participating in physical relationships with other women more than society wanted to acknowledge (Innes, 8). In his essay, Freud brought a new idea to the lesbian relationship that did not involve any type of mental unstableness or lack of health. Freud said in an essay “The Transformation of Puberty” that the sexual activity of young girls is “subject to the watchful guardianship of the mother” (Innes, 8). This analysis opened up an entire new idea, that a lesbian’s impact began at a young age, starting with the influence and level of neglect from the mother. But not all of the influence lies in the hands of the mother. A father participating in unfaithful actions with a mistress has a “sexual impression on the girl that leaves a permanent after effect in the shape of tendency to homosexuality” (Innes, 8).

By the 1920s, homosexuality was discussed more openly and by a greater audience due to the new attitude of “the Roaring Twenties”. Maurice Chideckl analyzed the increased fascination with homosexuality by saying it “characterized the lives of many ladies of the generation that preceded ours, and is more prevalent in our day and age than ever before” (Faderman, 31). This new image of lesbianism accentuated the women’s mannish characteristics, emphasizing how she has departed from what society perceived as a women’s proper femininity (Faderman, 31). But these stereotypes of the “new lesbian” began to dissolve when lesbianism became less recognizable through physical appearance. Lesbianism was suddenly linked to the new found sexual freedom of the 1920s beginning with the image of the flapper, the epitome of femininity and sexuality during this time period (Faderman, 32).

This new idea of lesbianism was progressed through the opinions of the black community, an influential factor in the lifestyle of the people in Harlem. Langston Hughes was an influential man who impacted the way Harlem is portrayed and understood (American Library). His creative genius was influenced by his life in New York City's Harlem, a primarily African American neighborhood (American Library). The literary works of Hughes shaped American literature and politics and his strong sense of racial pride and desire for equality was portrayed through his poetry and plays (American Library). His words from one of his most famous poem’s “Juke Box Love Songs” expressed the freedom surrounding Harlem when he says “Take Harlem's heartbeat/ Make a drumbeat/Put it on a record/ let it whirl/ And while we listen to it play/ Dance with you till day--Dance with you/ my sweet brown Harlem girl” (Knopt, 1994). Hughes symbolism of dancing through the day shows the free and expressive attitude of the Harlem period expressed not only through music but also through their sexuality.

By 1922, Gertrude Stein indicated that women were already referring to themselves as “gay” or “just exploring” those who also wanted to participate in the manifestations of lesbianism in America (Faderman, 36). Lillian Faderman analyzed in her novel how Harlem and Greenwich Village provided an arena of “like-minded cohorts” during this time of sexual rebellion and freedom. Harlem had the greatest appeal for whites looking to explore their sexuality. It welcomed this new party atmosphere and began to attract people who came to party and “be free”, meaning the tourist rate increased in Harlem helping the city’s economic situation (Faderman, 37).

White people began to participate in activities originally centered on black freedom, and used it to explore their own new found freedom in their sexuality. Although the white people flocking to the black community to express their sexuality could be looked at as racist, it gave Harlem a new and crazy appeal to a new group of society (Faderman, 40).  They went to Harlem to experience homosexuality that was forbidden in their culture by watching transvestites, rubbing shoulders with homosexuals, and acting out their sexuality with the primal and erotic African feel (Faderman, 40). For the first time homosexual white people felt like the minority in the heterosexual community and Harlem became a place of refuge which the homosexuals were grateful for (Faderman, 41). In the novel Strange Brother a character describes the relationships with the black community being “a bond because both communities flourished under heavy bonds, and the black community acknowledged that bond” (Faderman, 41).

Because most of the night clubs in Harlem were accepting and open to homosexuals, many of the songs talked about the homosexuals that were in the night club. In the nightclub The Congo, the “wonderful drag blues” were sang by the heterosexuals and homosexuals saying “And there is two things in Harlem I don't understan'/ It is a bulldyking woman and a faggoty man./ Oh, baby, how are you?/ Oh, baby,what are you?" (Faderman, 42) These playful and jokey lyrics were common in the homosexual nightclubs. Although these lyrics were playful for the homosexuals to hear, black writers of this time period in Harlem expressed a kind of discomfort when the white homosexual appeared in the nightclub (Faderman, 42).  White writers, according to Faderman, however gave the impression of “anything goes” and that no one in Harlem was disturbed by the gay community Harlem attracted.

Whites were reluctant to see Harlem’s resistance towards homosexuality, and instead viewed Harlem as “wide open” and approving of their new found freedom (Faderman, 44). The whites “slummed” in Harlem to express their new identity and finally began to feel welcomed in a new community (Faderman, 45). Commonly, the white women who entered Harlem were simply “trying on” the idea of lesbianism and rather thought of themselves as bisexual (Faderman, 46). These women wanted to explore the sexual freedom only available in Harlem and express their right to explore a variety of sexual opportunities. Because women were tied down to their expectations as a mother or a wife they wanted to believe they still had the opportunity to live life in their own fun and adventures way of the 1920s, without the limitations of their own families (Faderman, 46).

This crazy and adventurous time period came to a sudden end in the 1930s when the effects of the Great Depression began to set in (Smith). The economic downturn led to the departure of Harlem’s prominent writers, such as Langston Hughes. Although the Harlem Renaissance lasted for a brief time, the cultural and economic impact it had on society was great. This Renaissance left society with a handful of inspirational people with opinions about freedom and expression that carried on into society throughout the following years (Smith). It is not surprising that sophisticated heterosexuals, both blacks and the tourists who were intrigued with black life were taken with such lyrics from these musicians and poets. These lyrics flaunted unorthodoxy with a vengeance but also exhibited the vestiges of discomfort toward female sexual autonomy that individuals scoffed at (Smith). The discomfort displayed in the music and poems proved that although society could not completely understand women’s actions they were slowly becoming acceptable to society, even as the Harlem Age came to an abrupt end.

The primary source document I have chosen is a poem written by the famous poem Langston Hughes. He wrote it around the 1920s about the free and reckless times in the Harlem Renaissance. Hughes was a well respected and famous poet during this time, and this well-known poem perfectly represents the freedom associated with the Harlem Renaissance through music and their sexuality. 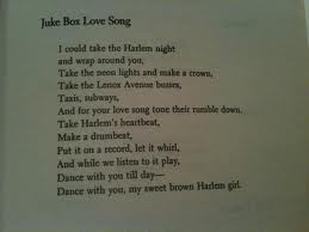 This video is Langston Hughes himself presenting one of his other famous poems "The Weary Blues." His introduction and the music played for him shows how important he was to society and how influential his poetry was in this time period. 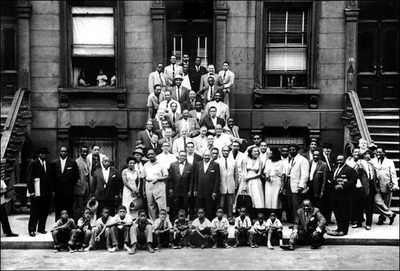 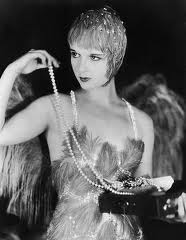 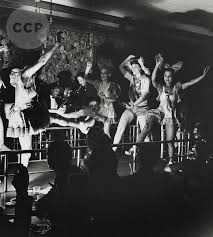 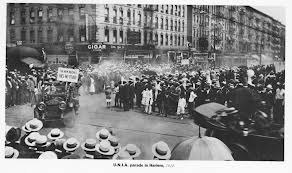 1. The first picture on the upper left represents the men in Harlem and the mix of races that was finally occurring. Before the whites and blacks hardly interacted, but in Harlem they had constant interaction with each other and accepted each other.

2. The top picture in the middle represents the flapper in the 1920s. This new image of the woman represents her new sexual freedom and expression.

3. The third picture shows the night club scene of Harlem and how crazy and sexual the scene was.

4. The last picture shows a parade in Harlem during the day. This parade brought together the people of Harlem to fight for their rights as individuals.