Third-wave feminism arose in the twentieth century during a time were women’s studies and female dominated literature was becoming prominent in the media as well as in the educational system (757). Third-wave feminists focused on issues of sexuality and pushed against the stereotypical male and female roles. In this era the media became an outlet for third wave feminists, primarily younger women to propose and reevaluate the stereotypical conventional idea of a woman. Jennifer Reid Maxcy Myhrem was a feminist that went against the strict boundaries between female and male sexuality norms. She grew up in the midst of an era in which women were advocating for the ratification of the ERA (Equal Rights Amendment) and this pushed her to pursue the feminist wave.  As she grew older Myhrem continuously was in support of the feminism wave, writing papers in school about women’s suffrage and reading literature focused on women (758). Her support for the feminist wave continued throughout college, even leading her to flourish as a known feminist. Myhrem’s shift into a feminist occurred when decided she no longer would place much focus on her appearance and let her femininity define her in society. This excerpt describing Myhrem’s shift to a feminist is taken from her article entitled “One Bad Hair Day Too Many” that she wrote to detail her reasons for this shift. This article was created during the primary periods of the third-wave feminism era in the twentieth century or late 1900’s. Myhrem’s purpose for creating this article was to advocate and push for a change in the conventional ideas about female appearances or beauty norms. She wanted to advocate to society that women should not be forced to look like the stereotypical female in order to be deemed attractive to others. Her article could have been published in a self-produced magazine that focused on feminist issues. Myhrem’s article was one of the many articles published in female magazines and detailed the issues pushed for during the era of third-wave feminism.

In her article Jennifer Myhrem details her ideas of “femininity” to her shift into feminism stating that she became a part of the feminist movement when she removed herself from society’s conventional ideas about beauty norms.  Myhrem highlights that femininity is not a quality innate in a woman but rather a quality that women spend time trying to construct and embody. She believes that society places a strong emphasis on how a female should look and her appearance is key in determining a distinction between genders. Myhrem presumes that the beauty norms society advocates discourage women from being themselves and creating their own image. As Myhrem states, a significant moment for her shifting into a feminist was when she decided that would quit shaving and devoting time on her appearance. Her ideas on “femininity” were that women should not be forced into looking like the stereotypical women and that “femininity” was a creation of society not an innate or biological quality. This idea and her resignation of femininity as Myhrem states was her first action as a feminist (758). Overall, Myhrem’s feminism arose from her idea on “femininity” and it lead her to challenge the conventional ideas of society. As Myhrem states, it takes a lot for a woman to look like a woman or look like the idealized woman society promotes. She believes women should not centralize their appearance on an idea created by society and women should be free to express themselves in terms of what they define as beauty not society’s definition.

As Myhrem describes in her article, the media and society portrays feminists as “masculine” a portrayal that plays a key role in the refusal of woman joining the feminist movement. Feminists are portrayed as masculine in society for challenging the conventional ideas and norms of a woman. This portrayal of feminists being “masculine” is categorized not solely on appearance but also on actions as well. A female challenging societal gender beliefs will be tagged as masculine because she is voicing her personal beliefs onto others, something that obscene in society. Society’s emphasis on women not having freedom of speech is the norm as women are discouraged to speak their minds. When women voice their personal beliefs like feminist activists do they are tagged masculine to discourage their voice in society. The portrayal of feminists that society creates is used to discourage women from joining the feminist movement, instituting several ideas on what a feminist looks in appearance and does. Based on appearance solely, society portrays feminists as being masculine in all aspects. Myhrem details in her article that the media and others label her as “butch” (758). She states that she is one of the feminists in the media seen as being hairy legged and strident, this constitutes to the key role that the appearance plays in the discouragement of partaking in the feminist movement. When society and the media portray feminists as masculine or being manly in appearance and actions, women are easily discouraged.

Women fear being labeled and seen in society as masculine because it deems them of their worth, as women believe that being attractive is the cause for success in society. As Myhrem details women spend an abundant amount of time on their physical appearance to be feminine, a quality that society developed as being synonymous to “not men” (758). Women fear being seen as masculine because it will discourage their appraisal in society and lessen attention from male individuals. Women who are viewed as masculine are deemed in society as being lesbian or “butch”, misconceptions that have created fear in women. If a woman is viewed as masculine she is automatically looked down upon in society or is less attractive. A woman’s appearance creates a distinction between genders; if a woman is “masculine” in her appearance then it is seen as unconventional. Society institutes idealized beauty norms for male and females, when a female is viewed other than being feminine then she is challenging and going against societal views. Women’s fear for being tagged as masculine arose from the beauty norms society created. Society creates a clear distinction between genders and also how attractive an individual is according to these perceptions. Myhrem details that women should not fear being viewed as “masculine” or “butch” because it gives males power, as it discourages women to join the feminist movement (758). Women primarily fear being categorized as masculine because of society’s beauty norms that do not constitute with this view or characteristic.

This excerpt from Jennifer Myhrem’s article provides a clarification to better understand the issues in third-wave feminism and the beauty norms of the twentieth century. Articles like the one Myhrem wrote were primarily important for the change in norms and were prominent in third-wave feminism as they advocated for feminist issues. Myhrem’s article in particular challenges the beauty norms of society as she instituted her personal beliefs on “femininity”. She advocated that women should be allowed to freely express themselves in terms of their appearance without fear of how society would view them. The media played a key role in Myhrem’s promotion for change in beauty norms and also in third-wave feminism as it gave women and feminists a vocation. Women were able to freely express their thoughts and beliefs in self-produced magazines containing articles like Myhrem’s. This article contributes to women’s history as it conveys the issues that were prominent in third-wave feminism. It also depicts how significant the media was in women’s history especially for feminists. Articles like Myhrem’s arose conflict in society, conflicts that led to barriers between gender roles in society to be eradicated. Without sources like Myhrem’s article it would be unclear how predominant feminist issues were in society. This source highlighted third-wave feminism in women’s history as it focused on the advancement of the media to advocate for issues at the time and the significance of the feminism wave as well.

“Those who break too many of the stereotypes are made to pay with social disapproval. A woman can wear her hair short, but not too short. She can forgo makeup as long as she wears earrings. If she doesn’t follow the rules, she will be labeled unfeminine, manlike, butch. These are words that provoke an immediate recoil. These are words that antifeminists have used to keep women silent, they are words we must learn not to be afraid of."
- Jennifer Reid Maxcy Myhrem.

This quote by Jennifer Myhrem illustrates the essence of third-wave feminism. Myhrem advocated for a change in the stereotypical ideas of gender and this quote highlights what other feminists at the time advocated for as well. As Myhrem states women should not be discouraged if they are labeled as manlike or unfeminine.

The excerpt illustrates the start of third-wave feminism issues as Walker states "do not nurture them if they don't prioritize our freedom to control our bodies and our lives." This was an issue prominent at the time as women still lacked control over the lives and were judged upon if they did not conform to the norms at the time. 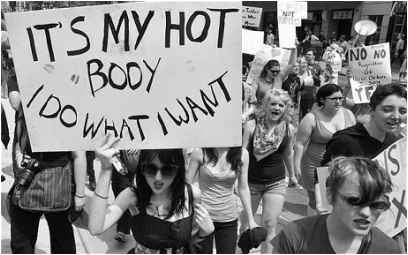 Image above illustrates women protesting against their lack of freedom to do as they desire with their bodies. This a big issue that third-wave feminists advocated for. Women were belittled by society and degraded for dressing a certain way or behaving in distinct manners that society viewed as only things men did. Women were often coined with terms like "slut" if they dressed inappropriately according to others or participated in sexual activities with men.