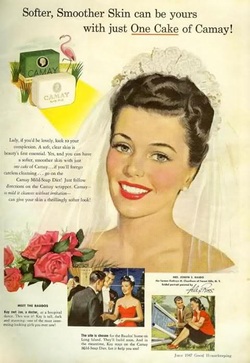 This is also a common advertisement for skincare, and common in the way that it would tell women the best way to live their lives, and essentially tell young, single women what it was they wanted. Much like the other advertisements from this era, the use of cosmetics was more than to simply enhance one's looks, it meant getting the guy, or winning the prize. This specific advertisement is for a Camay facial cleansing bar. The top box says, "Lady, if you'd love to be lovely, look to your complexion. A soft, clear skin is beauty's first essential. Yes, and you can have a softer, smoother skin with just one cake of Camay... if you'll forego careless cleansing... go on the Camay Mild Soap Diet! Just follow directions on the Camay wrapper. Camay - so mild it cleanses without irritation - can give your skin a thrillingly softer look!" This also appears to be an engagement post in the newspaper stating, "Meet the Baudos: Kay met Joe, a doctor, at a hospital dance. This was it! Kay is tall, dark, and stunning - one of the most interesting looking girls you ever saw! The site is chose for the Baudos' home on Long Island. They'll build soon. And in the meantime, Kay stays on the Camay Mild Soap Diet. Let it help you too!" Showing the Baudos' as the perfect American Dream couple, and insinuating that it is because of the Camay soap that Kay was able to achieve said dream.

"Isn't that the problem? That women have been swindled for centuries into substituting adornment for love, fashion (as it were) for passion?... All the cosmetics names seemed obscenely obvious to me in their promises of sexual bliss. They were all firming or uplifting or invigorating. They made you tingle. Or glow. Or feel young. They were prepared with hormones or placentas or royal jelly. All the juice and joy missing in the lives of these women were to be supplied by the contents of jars and bottles. No wonder they would spend twenty dollars for an ounce of face makeup or thirty for a half-ounce of hormone cream. What price bliss? What price sexual ecstasy?"
- Erica Jong, American poet and fiction writer born 1942 in New York City, New York

Multimedia Gallery: Cosmetic Advertisements from the 1920s and 1950s 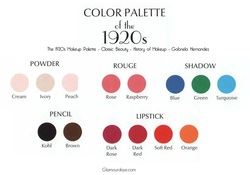 This image shows the color palette of cosmetics in the 1920s, when cosmetics first started to be mass-produced. For face powder, the colors were cream, ivory, and peach. There were no colors for darker complexions, because it was the impression of the cosmetic companies that everyone wanted to have beautiful pale skin. For rouge, or blush, the colors were rose and raspberry, colors that showed a woman's natural flush. For eyeshadows, the colors were royal blue, green, and turquoise, to enhance natural eye colors, and add vibrancy to them. For pencil, or eyeliner, it was basic black and brown, no exciting colors yet. And lastly, for lipstick, the color variations were dark rose, dark red, soft red, and orange, all of which were to make a woman's lips more voluptuous and desirable. 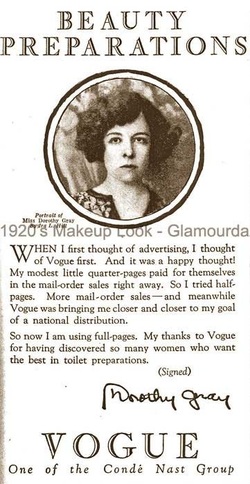 This small interview was conducted to Dorothy Gray, a very significant woman in the time of the 1920s "Cosmetic Revolution". She owned one of the most popular cosmetic companies at the time. Here she is stating her advancement in advertising with the Vogue magazine, a part of the Condé Nast Group, a major magazine conglomerate now owning 20 magazines, Vogue, Vanity Fair, Glamour, Brides, Self, GQ, The New Yorker, Condé Nast Traveler, Bon Appétit, Epicurious, Wired, W, Lucky, Golf Digest, Golf World, Teen Vogue, and Ars Technica. This interview shows just how valuable cosmetics were, going from quarter page advertisements to entire pages, the supply and demand of these ads were in an upward spiral. 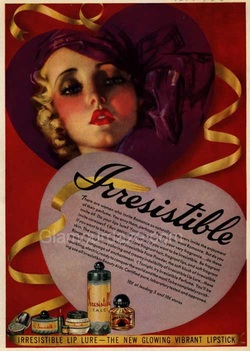 This is an advertisement from the 1920s for a new lipstick from the brand Irresistible (no longer existent). The product an Irresistible Lip Lure is a new "glowing and vibrant" lipstick formula. The advertisement states, "There are women who invite Romance as naturally as flowers invite the enjoyment of their perfume. You envy them, perhaps. For you, too, want Romance. But do you invite it? Do your lips lure? Your thin, your your, your very fragrance... do these invite caresses? Buy IRRESISTIBLE PERFUME if you want to be Irresistible. Be fragrant if you want to be pursued. Men adore fragrant hair, fragrant lips, and soft fragrant skin. The satin-smoothness of Irresistible Face Powder, the soft blush of Irresistible Rouge, the seductive coloring and creamy indelibility of Irresistible Lip Lure... these sparkling, electric, ready to conquer the world and the man! To be completely ravishing use all Irresistible Beauty Aids. Ceritified pure, laboratory tested and approved." $.10 of leading 5 and $.10 stores
This advertisement from the 1950s from the cosmetic company Maybelline very bluntly expresses that if you use their products, you will enhance your face and look more beautiful. Whereas, if you do not wear these cosmetic products, they enhance the negative features of the actress' face.The use of echoing in the intro of the video is a far less subconscious take on product branding than in today's society.

Steele, Lindsey N. "The Cosmetics Revolution: A Change in the Attitudes and Values in the American Woman." Urpasheville.org. Salisbury University, 31 Mar. 2011. Web. <http://urpasheville.org/proceedings/ncur2011/papers/NP50499.pdf>.